Mandrake Dynasty is an Ash Mandrake’s solo studio project focussing on his guitar innovations.  There are 8 of these guitars. Ash designed them to explore varieties of the bass and the tres. There are 4 single concept guitars and 4 hybrids which explore fretless/fretted, bass/tres and other combinations on the same neck.

Hover over the circles to watch and listen to a short clip of the guitar being played. Click on the circles to find out more about the individual guitars. 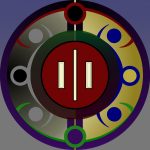 WITHIN MANDRAKE DYNASTY THERE ARE FOUR SINGLE CONCEPT GUITARS:

THERE ARE FOUR HYBRID GUITARS EXPLORING MIXED CONCEPTS ON THE SAME NECK:

ALL ARE ORIGINAL CONCEPTS CONCEIVED AND DESIGNED BY ASH MANDRAKE

THE 8 GUITARS ARE USED IN FOUR ASH MANDRAKE BAND COLLECTIVES: